Jay Leno: the man behind the mask (part II)

For those still shocked over the author’s conclusions as to the true identity of legendary American talk show host, Jay Leno, the following may not serve to offer any additional comfort.

Nepotism is the lifeblood of Hollywood and the entertainment industry at large, and most of the famous stars of stage, screen, and television are, in fact the sons and daughters of the elite, the rich and the socially prominent, and many possess genealogical ties to European nobility and even royalty.

The host actor behind the mask of celebrity comedian and late night television luminary Jay Leno proves to be no exception – a multi-talented actor capable of assuming and maintaining various and simultaneous roles while under the glaring scrutiny of both public and press.

Rest assured, only the most highly skilled and well-trained performers can maintain the grandest of deceptions.

Nevertheless, the larger question looms: should such grand deception be allowed to persist, or does it persist because of an apathetic public acutely stricken with blind celebrity worship?

When performing research for this duo of installments, one was stricken with the notion it may have been no accident Andover, Massachusetts was chosen as the biographical hometown of Jay Leno’s character. Comparatively, in terms of social and economic qualities, provincial Andover appears to possess the precise proletarian flavor imagined by the host actor’s rich and prominent Hollywood family.

And of course, Andover is home to a number of masonic lodges and a Grand Lodge, and certainly, the presence of Freemasonry continues to play a necessary component in maintaining and concealing the secrets of Leno’s host actor and his true origin, as well the dark secret of the prevailing actor based reality. The actor based reality is one of Freemasonry’s most precious secrets, with deep traditions rooted in the Shakespearean era of Elizabethan England.

That hallowed tradition has carried on for generations, and the Hollywood inspired character of Jay Leno merely represented the latest in a long line of royal court jesters, only his character was custom designed to entertain and to be cherished and adored by a proletarian audience. Loyal readers may be wondering though, how it is the author may have arrived at the idea Leno, one of American pop culture’s most revered figures, was merely a character hiding behind a mask.

Well, one could initially admit such a notion was brought on due to strong intuitions something may have been amiss, bolstered by the fact one discovered, as usual, that Leno’s celebrity biography is heavily laden with numerological markers. Right from the beginning, biographical details claim Leno was raised in New Rochelle, New York (el=biblical Elohim/LL=33). Wikipedia states that as of 2007, New Rochelle had a population of 77,260 (77777=tetragrammaton/5 cardinal points of the pentagram or 2 3’s/33), and was not only voted one of the best places to raise children by Newsweek magazine in 2008 (2 8’s/88/mark of the Jesuit order), but based on the results of an analysis of 550 of the nation’s most favorable cities, ranked the 13th (13/summit of masonic pyramid) best American city to live in.

In summary, one’s suspicions duly prodded one to investigate further.

In retrospect, and while examining past episodes of the Tonight Show with Leno as host, one happened to have observed that social and political commentary seemed to be a major component of the character’s brand of comedy. While this occurred no doubt by design, one noticed that both during the show’s opening monologue and during a segment entitled “Headlines” prior to the presentation of that evening’s celebrity guests, Leno would deliberately lampoon the news of the day, almost as if the character were openly but slyly pointing out not only the fraudulent nature of the very mainstream news sources he was citing, but the fraudulent nature of the stories they distributed and reported as an accurate portrayal of national and world events.

It is also fascinating to note the audience’s reaction to Leno’s act, in that while they had been psychologically and socially conditioned to believe as truth everything they consumed through mainstream news channels, it seemed lost on them that the host wasn’t merely mocking the news’ fraudulent nature, but mocking the audience for innocently lending it such gospel credence. In essence, the joke wasn’t on the makers of the mainstream news, rather, it was being placed upon the credulity and naivete of the audience, the masses who continually consume and believe in it’s perceived veracity that were being subtly but no less deliberately lampooned. This too, represents a long standing masonic, and Shakespearean tradition, in that the barbed words of the satirical message delivered by the clandestine, originating source are cleverly placed into the mouths of manufactured characters donned in theatrical costumes.

And after all, what was Jay Leno but a costumed character, nothing more than a well-concealed host actor portraying a socially and politically functionary role? This also sheds an interesting light on the concept of comedy, in that while comedy delivered to a mass audience may superficially appear to be nothing more than benign entertainment, it’s benign nature conceals deeper, and even greater psychologically sinister characteristics.

The most extreme demonstration of this may have been the satirically natured comedy act of the late George Carlin, whose steady delivery of political and social commentary seemed designed to have the impact of a mace-like wrecking ball upon the psyche of the audience, while Leno’s act featured a more subtle, but no less visceral effect upon the senses.

Judging from this analysis, and from the perspective of pure objectivity, comedians such as Carlin and Leno represent the genuine deliverers of the news to the unsuspecting masses through an artistic vehicle its intended audience has been assiduously but ironically conditioned to consume as mere frivolous entertainment.

Indeed, comedians are not just merely entertainers, but social and behavioral modification specialists that, through the vehicle of comedy, are employed to help shape the conscious perceptions of the general public.

In this sense, the ruling elites are well aware, that the concept of comedy, when utilized judiciously as a psychological weapon against the public, may be just as potent and effective as music and other art forms – and the character of Jay Leno was one of comedy’s premiere practitioners.

In the previous installment it was revealed that the man, or host actor behind the mask of comedian Jay Leno was Hollywood luminary, George Clooney. It turns out, Clooney has some very interesting genealogical relations, relations to members of what is perhaps the most powerful family in Hollywood, a family that has provided modified models for a virtual stable of familiar Hollywood faces and personalities, both past and present, famous and not so famous. One is referring to the ancient European, Austro-German royal family of Von Furstenberg. In fact, Clooney’s latest wife, Amal, looks suspiciously similar to Tatiana von Furstenberg, daughter of Hollywood mogul Barry Diller and Princess Diane von Furstenberg:

It is becoming quite evident that not only has Tatiana been disguised as the ex-wife of Elon Musk portrayed by her brother, Prince Alexander, but now she may be doubling as the wife of Hollywood A-lister George Clooney.

Needless to say, folks, this particular rabbit hole is getting very deep indeed.

Research has determined that when it comes to maintaining the clandestine nature of the actor based reality, family members are often utilized as “beards” to keep the true identity of the Hollywood host actor perpetually hidden.

Could it be that Hollywood icon George Clooney AKA Jay Leno is a hidden sibling of Diller’s other hidden son, entertainment industry kingpin David Geffen?

If so, then this clearly indicates Leno’s biography that spins the romantic tale of the class clown rocketing to Hollywood fame and fortune while hailing from the comparatively humble origins of Andover, Massachusetts is, like most such Hollywood biographies, completely manufactured and well, bogus.

Another lynchpin in all of this is the identical public political stances of Diller, Geffen, and Clooney, all who have been known to support progressive political causes and American political candidates favoring progressive ideologies. Though this latter point may seem circumstantial at best, it is likely, given the true European royal lineage of their family, that none of these Hollywood personalities harbor any political convictions at all, and that such convictions represent a superficial pose and are maintained solely for the benefit of public appearances.

Four years ago, the Hollywood character Jay Leno decided to enjoy a homecoming. Here, in the following video, Leno and the interviewer are posed on the sidewalk near the doorstep of his alleged childhood home in Andover, Massachusetts. What is more than curious, amusing, and perhaps even cringe worthy, is in witnessing Leno’s body language and facial expression when he is asked if the house sitting in the background is indeed his childhood home. The duping delight that ensues, both on the part of Leno and the interviewer is truly priceless.

“This is my house,” Leno states while shrugging his shoulders.

Leno’s interviewer then gives the game away, and it truly appears as if both men are putting on an act, as if they are participating in another of the former Tonight Show host’s comedic skits.

“But there are other people living in there,” the interviewer replies, accompanied by an amused grin. Leno then dubiously qualifies while attempting to stifle a bout of laughter. “Well my friend Louis from high school lives here and he takes care of it – and it works out great.”

And lastly, Leno goes on to mention his older brother, who allegedly died in 2002, on October 6, at age 62 (loyal readers should readily observe the numerological markers). Other than the rather scant biographical details cited by Leno and Wikipedia – that his brother went to Yale (home of the notorious fraternal order Skull and Bones) and practiced law in Andover after returning from military service in Vietnam – there doesn’t seem to be any greater extensive information to be discovered concerning Leno’s brother Patrick. However, one was able to discover this Andover Historic Preservation web page (https://preservation.mhl.org/32-clark-road) that lists pertinent information about the Leno property, and it is loaded with numerological markers:

And, there is one last point to consider, folks. If there are any loyal readers who wish to take the liberty of performing a comparison sight analysis, does the house present in the following photograph appear to be the same structure positioned in the identical geographical location? Looking more closely, take note of how the house in the previous video from Leno’s 60 minutes interview snippet is set much further back from the sidewalk than the house featured in the following photograph taken from the Andover Historic Preservation site.

Is it just me, or does something seem amiss? 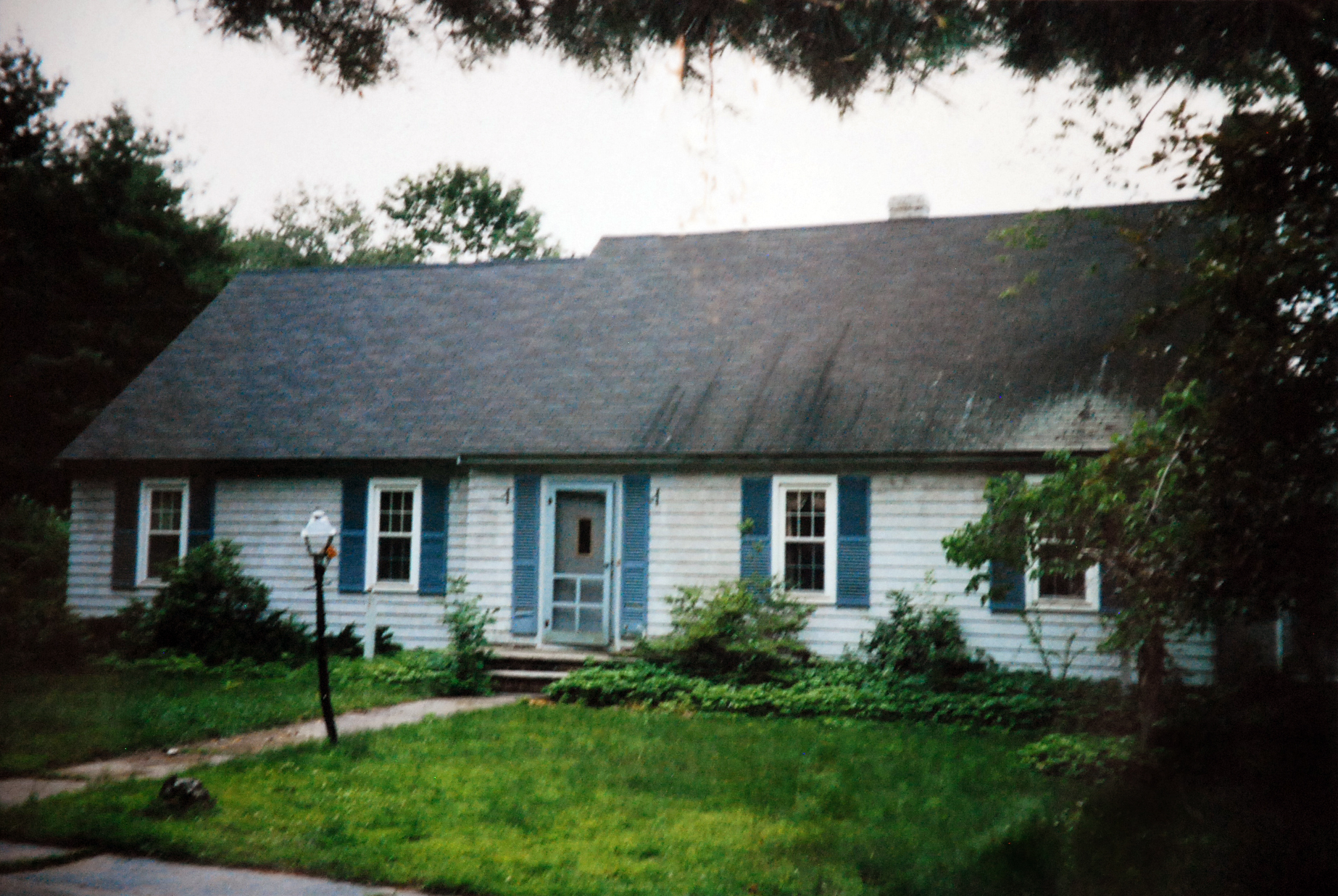 Then again, things always appear differently when one’s perception is distorted through the looking glass of Hollywood’s land of Oz, no?

5 thoughts on “Jay Leno: the man behind the mask (part II)”